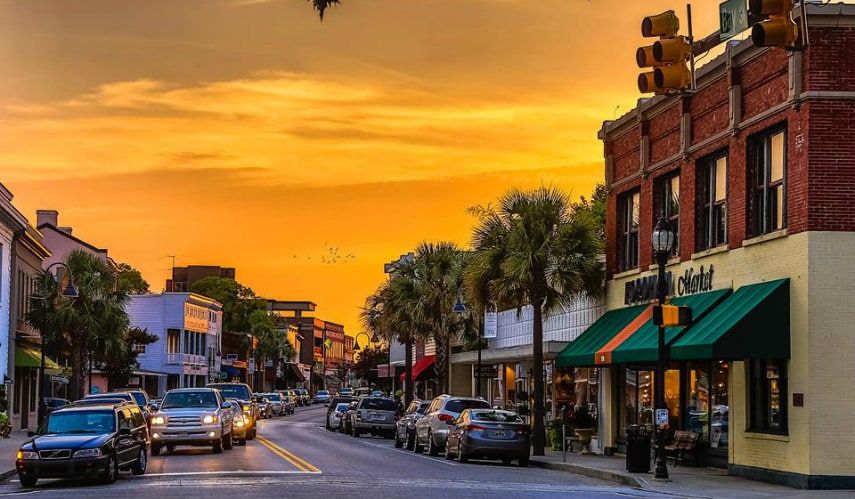 Beaufort is a grand old Southern town who has maintained her magical charms of yesteryear. She’s come through mighty wars, hurricanes, and earthquakes, and like many women with grit and determination, has emerged in all her finery, stronger than ever.

A stroll along Bay Street is a feast for the senses. Browse through the art galleries, boutique shops, gift shops, the old Beaufort Book store, and stop for a delicious meal at one of the top-notch local restaurants. Rich in history, Old South charm, and new world conveniences, Beaufort is located between Savannah and Charleston on South Carolina’s Atlantic Coast. Welcome to the best small hometown in the world!

The Lowcountry celebrates a long and positive relationship with the military through the Marine Corps Recruit Depot Paris Island, a Marine Corps military base first built in 1861 and used from 1915 to the present day, and the Marine Corps Air Station in Beaufort.

Beaufort is also known for its ongoing revival and celebration of Gullah culture, reflected in the artwork, cooking, and culture.

You may want to start your day with a guided sightseeing tour to learn about this town’s fascinating history that dates back over 300 years. If you’re feeling adventurous, try one of the town’s horse-drawn carriage tours or if you prefer, take a tour on foot. Go back in time and visit the Revolutionary War cannons at Stephen Elliott Park. These two cannons from a British warship sit on the Beaufort River’s edge at the end of Bay Street. They’re pointed directly at Lady’s Island on the other side.

The Verdier House Museum is a prominent Federal-style mansion built by John Mark Verdier, a prosperous merchant and planter. The house on Bay Street served as Union Army headquarters after Beaufort fell early in the Civil War. It’s home to three permanent exhibits.

On a warm afternoon, what could be more refreshing than stopping in at YoYo’s or Kilwin’s ice cream shop. If you dare to try something different and very southern, have a sweet tea float over at Scout Southern Market.

Walking beside the river, you’ll feel the peacefulness that is Beaufort. The feeling continues on a stroll down shady streets in the Old Point, where stately homes exude a charm and elegance of a bygone era.

Without a doubt, the most famous house is Tidalholm, the setting for movies like The Big Chill and The Great Santini, based on the late Beaufort resident Pat Conroy’s books. Situated on the easternmost point in town with lawns sloping down to the river, its views are breathtaking.

It doesn’t take long to feel the connection here between the people, their land, the river, and its history. Simple pleasures and stories are everywhere and life becomes an adventure to be explored and discovered each day.